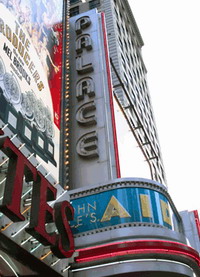 The lavish show (reportedly with a more than $12 million (8.8 million EUR) price tag) has energy to spare, a forward motion provided by ace director-choreographer Jerry Mitchell that simply refuses to quit. And a plot, based on the Amanda Brown novel and the 2001 Reese Witherspoon movie, that is more than serviceable.

So why, despite the expensive glitz and an aggressive, go-go attitude, does "Legally Blonde" only fitfully entertain? Most prominently because of a disappointing score.

Its music and lyrics do not add much to the story of Elle Woods, a perky sorority sister at Delta Nu who gets dumped by her Harvard Law School-bound boyfriend and decides to follow him to its rarified ivy halls. Along the way, this blond fashion-plate, with a propensity for wearing pink, discovers her self-worth, finds a new beau and gets a law degree to boot.

Female empowerment has proven to be a gold mine on Broadway for another big show: "Wicked," and its green heroine, Elphaba. So you can see what the folks behind "Legally Blonde" might have been thinking as they set out to create their own musical-theater poster girl.

Book writer Heather Hach has nicely condensed the story and even managed to add a few new jokes with up-to-the-minute popular references. While not exactly a cinematic masterpiece, the film had a cheerful spirit that Hach, for the most part, preserves. Things get a little convoluted in Act 2 when Elle and a trio of other law students assist in the trial of physical-fitness guru accused of murdering her much older husband. Yet Mitchell never lets things lag for too long.

What slows down the production are some of the songs by Laurence O'Keefe and Nell Benjamin. Most of them are vaguely pop, tunes with little discernible theatricality. The melodies evaporate quickly, particularly the more serious love songs for Elle, portrayed by Laura Bell Bundy, and her nerdy mentor, a teaching assistant played by Christian Borle.

Bundy can squeal "Omigod you guys" - which seems to be the one phrase all Delta Nu sisters have in common - with fervor. Yet she doesn't quite have the warmth that Witherspoon brought to the movie. The actress radiates efficiency.

Borle is a first-rate comedian as anyone who saw his performance in "Monty Python's Spamalot" knows. Here, unfortunately, Borle's comedic skills are kept under wraps as the musical's nice if boring good guy.

The supporting players come off better, most notably Orfeh as a forlorn, blue-collar beautician, who, according to Elle, must learn how to "bend and snap" if she is to attract a man. In this case, the object of her adoration is a hunky UPS man (Andy Karl) who gets one of the evening's biggest laughs with his deadpan delivery announcement, "I've got a package."

Then there are Michael Rupert, in terrific voice, as the predatory law professor who has designs on Elle and Richard H. Blake as the self-absorbed, would-be lawyer who dumps her.

A "Greek" chorus of Elle's sorority sisters - Leslie Kritzer, Annaleigh Ashford, DeQuina Moore - leads many of the dance numbers that seem to pop up every few minutes. Mitchell, who has choreographed such shows as "Hairspray," "Dirty Rotten Scoundrels" and the 2004 revival of "La Cage aux Folles," always keeps his large company of dancers on the run.

From a high-stepping march version of Elle's Harvard essay application to an athletic workout routine to a Michael Flatley-"Lord of the Dance" inspired spoof, Mitchell conjures movement with style and wit.

Finally, there are the production's two canines, a Chihuahua and a bulldog, which, of course, get immediate audience approval. But it's Mitchell who should get the crowd's biggest hand. Making a show this big - and tuneless - move is hard work.