Jan Ullrich and Bjarne Riis, former Tour de France winners, are among cyclists accused of doping in a book written by a massage therapist who worked for Team Telekom from 1992-1996. 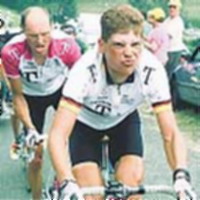 Jef d'Hont, a Belgian convicted of being an accomplice in the Festina team doping case in 2000, claims in his upcoming book that former team manager Walter Godefroot organized systematic doping on Telekom, now called T-Mobile.

Der Spiegel released samples Sunday of excerpts to be published in Monday's magazine.

"The riders wanted it even though team doctor Andreas Schmid was reluctant," d'Hont wrote. "Godefroot organized and financed the doping system."

D'Hont said documents to back his charges against Team Telekom, which included growth hormone and EPO use, were torn up by his wife during the Festina investigation, where the Belgian received a nine-month suspended sentence and 3,000 EUR (US$4,100) fine.

Godefroot, now the Astana team boss, told Der Spiegel through a lawyer that he denied any accusations that "I asked anyone to take banned substances or that I organized anything of this kind."

The new management of T-Mobile said it will investigate d'Hont's charges, including his claims that blood-doping booster EPO was supplied by doctors at Freiburg University medical clinic in Germany.

T-Mobile communications head Christian Frommert said the team will terminate relationships with any doctors proven to be involved in doping.

"If the claims about the University of Freiburg are proven true, we will look for alternatives," said Bob Stapleton, T-Mobile's American team manager.

T-Mobile is regarded as a leader in the fight against doping in the sport following a shake-up last year when Ullrich was linked to the Spanish doping scandal, then fired. The German cyclist retired on Feb. 26 under public pressure in Germany.

Several current members of T-Mobile were with the cycling team from 1992-1996, including team doctor Lothar Heinrich, whom D'Hont accuses of administering EPO shots, and team boss Rold Aldag, a rider at the time.

In an interview with German news agency DPA, D'Hont accused Riis - who leads the Danish team CSC - of being "full to the brim" with EPO when he won the Tour de France in 1996. Ullrich, according to the massage therapist, was also using the blood booster and growth hormones.

"Mornings the blood levels were controlled. In the evenings after the massage, new EPO dosages were given every two, three days in the hotel room," d'Hont wrote.

Udo Bolts, a Telekom rider at the time, dismissed d'Hont's story, saying the Belgian was out to make money with his book.