The state Supreme Court has dismissed charges of a couple who claimed they were defrauded when they bought an oil portrait of a woman wrongly attributed to American impressionist Frank Weston Benson at a Christie's auction. 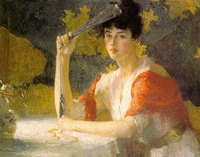 Johannes and Betty Krahmer appealed to the Supreme Court last year after a lower court judge dismissed their 2004 lawsuit against Christie's, saying the lawsuit was filed too late, and that there was no evidence to infer that the famed auction house knew the painting was a fake.

The dispute involved an oil portrait of a woman that the Krahmers bought in 1986, thinking it was the 1912 work "Interior" by Benson. They paid $38,500 and received a six-year limited warranty of authenticity.

In 1999, the Krahmers contacted a committee in Boston compiling a definitive list of Benson's works. They subsequently learned of a similar painting at a Connecticut museum, which turned out to be the real one. When the Krahmers tried to sell their painting on consignment in 2002 to Sotheby's auction house, they were told by a Sotheby's restorer that it might be a forgery.

The committee in Boston theorized that the original was acquired from Benson by the famed Detroit Club in Michigan in 1914, but was sold in the early 1970s and replaced with a copy, perhaps in the original frame.

The Krahmers asked Christie's to rescind the 1986 sale, but the auction house refused, saying the six-year warranty of authenticity had expired.