Police have arrested 172 Islamic militants, some of whom were trained pilots so they could fly aircraft in attacks on Saudi Arabia's oil fields. 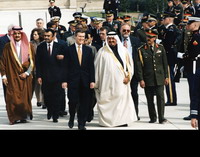 The ministry issued a statement saying the detainees were planning to carry out suicide atttacks against "public figures, oil facilities, refineries ... and military zones" - some of which were outside the kingdom

"They had reached an advance stage of readiness and what remained only was to set the zero hour for their attacks," Interior Ministry spokesman Brig. Mansour al-Turki told The Associated Press in a phone call. "They had the personnel, the money, the arms. Almost all the elements for terror attacks were complete except for setting the zero hour for the attacks."

Asked about when the arrests took place, al-Turki would only say they occurred "at various and successive times."

The ministry did not say the militants would fly aircraft into oil refineries, as the Sept. 11, 2001 hijackers flew planes into buildings in New York and Washington, but it said in a statement that some detainees had been "sent to other countries to study flying in preparation for using them to carry out terrorist attacks inside the kingdom."

The militants also planned to storm Saudi prisons to free the inmates, the statement said.

In their crackdown, the police seized large quantities of weapons, explosives and money. More than 20 million riyals (US$5.3 million) had been seized in the operation, one of the largest sweeps against terror cells in the kingdom.

The ministry did not name the terrorist group that the militants allegedly belonged to. It referred to them only as a "deviant group" - the Saudi term for Islamic terrorist.

The Saudi state TV channel Al-Ekhbariah broadcast footage of a large quantity of weapons discovered buried in the desert. The arms included AK-47 rifles and other rifles, brickettes of plastic explosives, AK-47 magazines, handguns and rifles wrapped in plastic sheeting.

Al-Ekhbariah showed investigators breaking tiled floors with hammers to uncover pipes that contained weapons. In one scene, an official upends a plastic pipe and bullets and little packets of plastic explosives spill out.

The channel also showed investigators digging up plastic sacks in the desert.

The al-Qaida terror group, whose leader Osama bin Laden is a Saudi, has called for attacks on the kingdom's oil facilities as a means of crippling both the kingdom's economy and the hurting the West, whom he accuses of paying too little for Arab oil.