A 51-year-old Virginian officer was accused of aiding the enemy for providing an unmonitored cell phone to detainees while commanding an MP detachment at the jail that held Saddam Hussein. 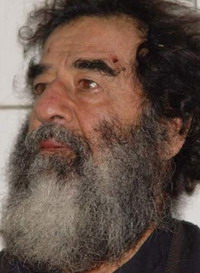 Army Lt. Col. William H. Steele faces nine charges in all, including fraternizing with a prisoner's daughter, storing and marking classified material, maintaining an inappropriate relationship with an interpreter and possessing pornographic videos.

The rare charges were among the most serious levied against a senior American officer in Iraq, but were the latest in a series of embarrassments for the U.S. military detention system here.

Steele was detained in March and is being held in Kuwait pending an Article 32 hearing, the military equivalent of a grand jury hearing, officials said.

U.S. military spokesman Lt. Col. James Hutton told The Associated Press that Steele is 51 and is from Prince George, Virginia, a county just south of Richmond and 217 kilometers (135 miles) south of Washington, D.C.

The charges were announced Thursday but the military did not release the personal details until Friday.

The alleged incidents occurred from October 2005 to this February, starting when Steele was commander of the 451st Military Police Detachment at Camp Cropper on the western outskirts of Baghdad and in his later post as a senior patrol officer for the provincial transition team headquarters at nearby Camp Victory, the main U.S. military base.

The U.S. military command declined to comment on the case but stressed nothing had been proven. "These are troublesome allegations, but again they are just allegations at the moment," the main U.S. military spokesman, Maj. Gen. William Caldwell, told The Associated Press Radio.

The most serious charge, aiding the enemy, was tied to Steele's time at the jail at Camp Cropper.