Faculty and students of the German high school, where a teenager killed himself and 16 others paid tribute to the victims of the Virginia Tech shooting while they marked the fifth anniversary of their own tragedy. 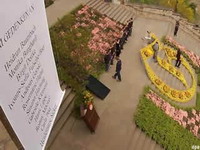 Some 1,000 students, teachers and parents observed a moment of silence for those who died in 2002 at the Gutenberg high school, in the eastern city of Erfurt, as well as on April 16 in the U.S. state of Virginia.

"We observe this silence for (the victims of Erfurt)," Principal Christiane Alt told the mourners at the ceremony. "We are also pausing to express our disbelief and our sincere compassion for those who are crying for their dead thousands of kilometers away."

On April 26, 2002, 19-year-old Robert Steinhaeuser fatally shot 12 teachers, a secretary, two students and a police officer before turning his gun on himself in Germany's worst school shooting ever.

Twenty seven students and five faculty members were killed in the rampage at Virginia Tech earlier this month.

Students and teachers in Erfurt - many of them witnesses of the shooting in Germany - placed flowers in front of a memorial for the victims at the school.

On the school's windows, where students had put up help-signs during the rampage, there were posters dedicated to the victims saying "We remember."

Separately, German Teachers Association Josef Kraus noted that 20 more students had been killed at German schools since the Erfurt shooting and urged action.

"Young people's willingness to use violence can only be countered effectively when politics, the media, social workers and parents all work together and do not let schools deal with this problem by themselves," Kraus said.

Steinhaeuser, who had been expelled from the school for forging a doctor's note, was a gun club member licensed to own weapons. The attack led Germany to raise the age for owning recreational firearms from 18 to 21.