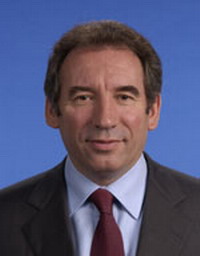 Third-place candidate Francois Bayrou refused to endorse either of the two remaining contenders for the French presidency Wednesday.

Conservative Nicolas Sarkozy and Socialist Segolene Royal are fighting over Bayrou's 7 million voters, who may determine who wins the May 6 runoff vote. But Bayrou, a lawmaker who navigates between left and right, said Wednesday, "I will not give any guidance about how to vote," adding that he thought both candidates would worsen France's problems.