Ex-Spice Girl Brown and Eddie Murphy: no reason for the split?

Eddie Murphy  has left former Spice Girl Melanie Brown with a baby, a tattoo of his name and no explanation for their sudden split. 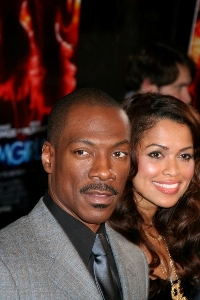 Ex-Spice Girl Brown and Eddie Murphy: no reason for the split?

In an interview with OK! magazine, she said she and Murphy were "soul mates" who got tattoos to proclaim their love and were mutually delighted with her pregnancy - until Murphy said on TV they were through and asked for a paternity test.

"A friend of mine called me to tell me. I was shocked, then I felt disgusted. We were madly in love with each other, and then this happens," Brown told the magazine.

Brown, 31, known as Scary Spice when she performed with the '90s hit pop group, gave birth to Angel Iris Murphy Brown on April 3 in California. She listed Murphy's name on the birth certificate. Murphy, 46, has said he is not sure he is the father.

Brown said she and Murphy were introduced by a mutual friend.

"There was this electricity between us. Within half an hour, we were holding hands. We were soul mates. We were like each other in so many ways. It was electrifying," she said.

"After three days, we both got tattoos. I had his name in his handwriting on me, and he had my name in my handwriting on him. Everybody around us was quite sick of us lovebirds.

"It felt like we had known each other for years," Brown said.

Murphy was "over the moon" about the pregnancy and discussed getting married after the baby was born. Then came his bombshell during a TV interview, about five months after their relationship started, she said.

"I tried to call Eddie and I couldn't get through. Then I got through, and he said he would call me back and that was it. He never called back," Brown said. That was four months ago and the two have not spoken since, she said.

"I don't feel humiliated. I think the only person who has humiliated themselves is Eddie. His behavior was unacceptable," Brown said. "Maybe one day Eddie will tell me why this happened."

Murphy, whose screen credits include "Dreamgirls," has five children from his marriage to Nicole Mitchell Murphy. Brown has an 8-year-old daughter.