Foreign Minister Abdullah Gul was seeking support in his bid for Turkey's presidency, after the main opposition group said it would boycott the parliamentary vote on his candidacy. 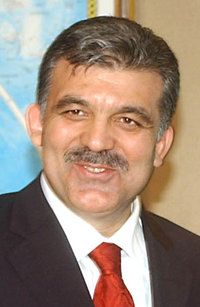 Turkey's prime minister announced Tuesday that Gul would be the governing party's candidate for president. But the prospect of electing a leading member of Turkey's Islamic-rooted government to the presidential palace a symbol of secularism has upset the country's secular establishment, backed by the military.

The division in Parliament reflects deep-seated mistrust of Prime Minister Recep Tayyip Erdogan's Justice and Development Party, which has been accused of raising the profile of Islam in this predominantly Muslim country with a secular government.

Gul must satisfy a diverse and often-divided audience: the country's Islamic-oriented hinterland, its secular business and military elite, and negotiators from the European Union who want Turkey to become a modern nation before any entry into their club.

Erdogan declared Gul's candidacy on Tuesday to the cheers of party members, whose support in a voting process that begins Friday is expected to secure him the presidency. In Turkey, the president has the power to veto legislation.

The selection follows months of political tension over whether Erdogan himself would run for the job, a prospect that infuriated secularists who believed he might use his Islamic credentials to dilute the nation's secularist traditions.

The seven-year term of the current president, Ahmet Necdet Sezer, ends May 16. By remaining prime minister, Erdogan will be able to steer government initiatives, promote economic stability and bolster his party's votes in general elections in November.

Gul and Erdogan have rejected the label of Islamist, citing their promotion of sweeping reforms as a means of advancing Turkey's EU bid.

In seeking support for his candidacy, Gul met leaders of opposition parties and independent lawmakers on Tuesday and Wednesday.

"For the first time a candidate for president is visiting lawmakers one by one," Gul said. "The decision belongs to lawmakers. I respect their decision."

But the main opposition, pro-secular Republican People's Party, which has 152 seats, said it would boycott the first round of voting Friday. It said it could apply to the Constitutional Court to cancel the election if the first round proceeded without two-thirds of the 550 lawmakers present, a move that could force early general elections.

The ruling party has said it only needs a quorum of one-third of the lawmakers. But the Republican party's threat led Gul to turn to tiny opposition parties as well as independent lawmakers to ask for their presence at Friday's session. The ruling party has 354 deputies, but Parliament's speaker cannot vote.

Two small center-right parties, Motherland and True Path, were expected to announce Wednesday or Thursday whether they would attend the first round of voting.

True Path leader Mehmet Agar said the "solution should be in the ballot box, and not in court."

Motherland leader Erkan Mumcu criticized the governing party for not consulting the opposition before selecting Gul as its candidate. "This country needs real democratization," he said.

Secularists fear that, if elected, Gul might help the Islamic-rooted government steer the country away from its secularist principles. They doubt he would put a brake on the governing party, as the current president, Sezer, has done by rejecting a record number of bills and appointments of officials deemed by some as too supportive of an Islamic agenda.

Gul's party has tried to ban adultery and banned the sale of alcohol in cafes run by its municipalities. It also has encouraged the opening of religious schools and spoke of lifting the ban on Islamic head scarves in public offices and schools.

Gul's wife, Hayrunisa, wears the traditional Muslim head scarf, and secularists recoil at the idea of such a religious symbol being worn in the presidential palace.