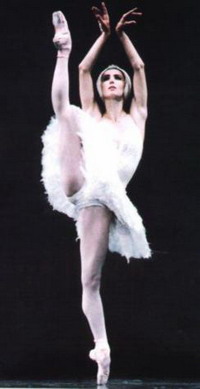 The Taiwan's famed Cloud Gate modern dance troupe’s founder said Wednesday that he was very fond of French ballerina Sylvie Guillem. He described her as a diligent dancer who insisted on perfecting challenging new moves during their recent collaboration

Lin Hwai-min choreographed a piece for Guillem, which she performed in London in September.

"Sylvie is a very hard-working, serious dancer. When I would tell her, 'This move is difficult, let's do something else,' she would say, 'No, I have to do this move. I'll do it well,"' Lin told reporters in Hong Kong.

Lin said Guillem had to adjust to a different rhythm and aesthetic.

Cloud Gate is in Hong Kong to perform a medley of their dances.

Besides working with Guillem, British dancer Akram Khan choreographed "Lost Shadows" for Cloud Gate. The show had a recent run in Taipei.

"It's fantastic. It's wonderful. It's something fresh," he said.

Asked about retirement, Lin, Cloud Gate's artistic director, said he was tired by the dance company's busy touring schedule but that Cloud Gate's board of directors was reluctant to see him leave.

He said, however, the company is training new choreographers.