The Iraqi government withheld recent casualty figures from the United Nations, fearing they would be used to present a grim picture of Iraq. 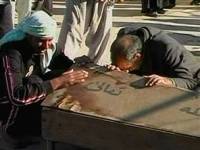 Working with its own figures, the U.N. released a new human rights report Wednesday saying that sectarian violence continued to claim the lives of a large number of Iraqi civilians in Sunni Arab and Shiite neighborhoods of Iraq's capital, despite the coalition's new Baghdad security plan. Begun Feb. 14, it has increased U.S. and Iraqi troops levels in the capital.

The U.N. Assistance Mission for Iraq report said civilian casualties in the daily violence between Jan. 1 and March 31 remained high, concentrated in and around Baghdad.

The agency also expressed concern about the treatment of detainees under the U.S.-Iraqi operation to pacify the capital, saying that families and other people often were randomly taken into custody, with more than 3,000 people in detention by the end of March.

For the first time, UNAMI said, its assessment of the human rights situation in Iraq did not contain overall death figures from the Iraqi government because it refused to release them, omitting what many had viewed as a rare, reliable indicator of suffering in Iraq. Government representatives could not immediately be reached for comment.

U.N. human rights officer Ivana Vuco said the government did not officially given a reason for refusing to release the numbers but it apparently "was becoming increasingly concerned about the figures being used to portray the situation as very grim."

"Inofficially however in a number of followup meetings to their decision we were told that there were concerns that the people would construe the figures to portray the situation negatively and that would further undermine their efforts to establish some kind of security and stability in the country," she said at a news conference at the mission's heavily fortified compound in Baghdad.

"We found the decision to be rather unfortunate because the figures were helping us ... to understand the scope of the problem," she said. "In our view it is the government's responsibility and they are probably the only one with the real capacity to gather the figures in a systematic manner."

Mission spokesman Said Arikat said the reason appeared to be that after the publication of its last human rights report on Jan. 16, Prime Minister Nouri al-Maliki's office told UNAMI its mortality figures were exaggerated, "but our figures were taken credibly they are probably among the most carefully screened figures."

He urged the government to reconsider its decision, saying the figures it could provide could "actually show what is going on in Iraq. Otherwise there will be a great deal of speculation."

Numbers for Iraqi civilians killed since the U.S.-led invasion began in March 2003 vary widely and are believed to be vastly underreported, in part because of political pressure.

The last U.N. report was issued in January found that 34,452 civilians were killed last year, including 6,376 in November and December, based on information from the Iraqi Health Ministry, hospitals across the country and the Medico-Legal Institute in Baghdad. Iraqi officials have complained that the numbers were too high.

The current report cited many examples of deadly attacks by insurgents and militias across Iraq during Jan. 1-March 31, but it often relied on media accounts of such killings and does not provide overall numbers for the period.

On Feb. 14, U.S. troops began stepping up their presence in outposts and police stations in Baghdad and areas surrounding the city, as part of the security crackdown to which U.S. President George W. Bush has committed an extra 30,000 troops. Thousands of Iraqi soldiers also are being deployed in the streets of the capital in an attempt to pacify it.

"While government officials claimed an initial drop in the number of killings in the latter half of February following the launch of the Baghdad security plan, the number of reported casualties rose again in March," the UNAMI study said.

Despite the government's announced decrease, the number of victims remained high, with up to 25 bodies still being found on some days during this period in Baghdad, the report said.

On March 1, it said, Iraq's Ministry of Interior announced that 1,646 civilians were killed in Iraq in February, most of them in Baghdad, but that "it is unclear on what basis these figures were compiled."

Despite the lack of government figures, UNAMI said the report still shows continued high levels of violence throughout the period, including large scale indiscriminate killings and assassinations by insurgents, militias and other armed groups.

"In February and March, sectarian violence claimed the lives of large numbers of civilians, including women and children, in both Shia and Sunni neighborhoods of Baghdad," the report said.

It also was the first time the U.N. has issued a quarterly report, previously offering bimonthly assessments, in a bid to enable it to focus more on specific themes like child abuse and detention centers.

"The continuing failure to take decisive action in this regard can only serve to encourage the climate of impunity that prevails today, undermining the government's own efforts to restore law and order and ensure respect for the rule of law," the report said.