U.S. Defense Secretary Robert Gates was heading to Berlin on Wednesday, the latest stop on a tour aimed at selling Washington's contentious proposal to build missile defense bases in Europe. 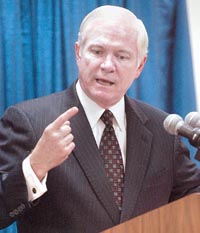 The plan to base interceptor missiles in Poland and a radar system in the Czech Republic has provoked harsh criticism, particularly from Russia, which has suggested it could revive a Cold War-like arms race.

In response, U.S. officials have pushed their message that the system would not affect Russia's nuclear deterrent, and is specifically designed to protect Europe from the possibility of a missile launch from the Middle East.

On Tuesday Gates held talks about the plan in Warsaw, where he told reporters that the Russians' questions "are questions that we can answer."

In a visit to Moscow on Monday, Gates offered to permit Russian officials to visit a missile interceptor base in Alaska and a missile-tracking radar in California to see how they work.

But in some of the harshest rhetoric in months from Moscow, the military's chief of general staff warned on Tuesday that his military might target elements of the system.

"If we see that the facilities pose a threat to Russia's security, the facilities will be objects for plans of our forces. Whether strategic, nuclear or otherwise - that's a technical question," Gen. Yuri Baluyevksy said.

Neither Poland nor the Czech Republic has yet agreed formally to the U.S. plans, and polls in both countries show the majority of their citizens are against moving ahead with them.

Many other European countries have also expressed misgivings.

Jung said earlier this month in Brussels that such a system was in Europe's interest, but noted that the current proposal would leave the continent's south exposed and that it should be large enough to protect all European territory.

Steinmeier - members of whose center-left Social Democrats have expressed strong skepticism - has said the U.S. plans are not without merits.

However, like conservative Chancellor Angela Merkel, he has urged that the U.S. engage in widespread dialogue with all parties before going ahead and that it should also involve NATO in the discussions.