Army Ranger was with American football star Pat Tillman when he died by friendly fire in Afghanistan. He confessed that he was told by a higher-up to conceal that information from Tillman's brother. 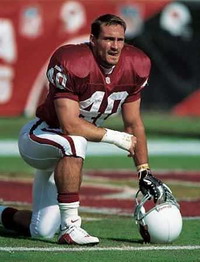 "I was ordered not to tell him," U.S. Army Spc. Bryan O'Neal told the House Committee on Oversight and Government Reform.

Tillman's death received worldwide attention because he had walked away from a million dollar professional football contract to enlist in the Army after the Sept. 11 terrorist attacks.

O'Neal said he was given the order by then-Lt. Col. Jeff Bailey, the battalion commander who oversaw Tillman's platoon.

Pat Tillman's brother Kevin was in a convoy behind his brother when the incident happened, but did not see it. O'Neal said Bailey told him specifically not to tell Kevin Tillman that the death was friendly fire rather than heroic engagement with the enemy.

"He basically just said, 'Do not let Kevin know, he's probably in a bad place knowing that his brother's dead,"' O'Neal said. He added that Bailey made clear he would "get in trouble" if he told.

Kevin Tillman was not in the hearing room when Bailey spoke.

In earlier testimony, Kevin Tillman accused the military of "intentional falsehoods" and "deliberate and careful misrepresentations" in portraying Pat Tillman's death in Afghanistan as the result of heroic engagement with the enemy instead of friendly fire.

"We believe this narrative was intended to deceive the family but more importantly the American public," Kevin Tillman told the committee hearing. "Pat's death was clearly the result of fratricide," he said, contending that the military's misstatements amounted to "fraud."

The committee's chairman, Rep. Henry Waxman, a Democrat, accused the government of inventing "sensational details and stories" about Pat Tillman's death and the 2003 rescue of Jessica Lynch, perhaps the most famous victims of the Afghanistan and Iraq wars.

"The government violated its most basic responsibility," said Waxman.

Lynch, then an Army private, was badly injured when her convoy was ambushed in Iraq. She was subsequently rescued by American troops from an Iraqi hospital but the tale of her ambush was changed into a story of heroism on her part.

Still hampered by her injuries, Lynch walked slowly to the witness table and took a seat alongside Tillman's family members.

"The bottom line is the American people are capable of determining their own ideals of heroes and they don't need to be told elaborate lies," Lynch said.

Kevin Tillman said his family has sought for years to get at the truth, and have now concluded that they were "being actively thwarted by powers that are more interested in protecting a narrative than getting at the truth and seeing justice is served."

Lawmakers questioned how high up the chain of command the information about Tillman's friendly fire death went, and whether anyone in the White House knew before Tillman's family.

"How high up did this go?" asked Waxman.

Pat Tillman's mother, Mary Tillman, said she believed former Defense Secretary Donald H. Rumsfeld must have known. "The fact that he would have died by friendly fire and no one told Rumsfeld is ludicrous," she said.

Tillman was killed on April 22, 2004, after his Army Ranger comrades were ambushed in eastern Afghanistan. Rangers in a convoy trailing Tillman's group had just emerged from a canyon where they had been fired upon. They saw Tillman and mistakenly fired on him.