The 12 advisers unanimously voted to urge the Food and Drug Administration to approve maraviroc, which Pfizer Inc. hopes to sell under the brand name Celsentri. It would represent the first so-called CCR5 receptor antagonist to be sold. 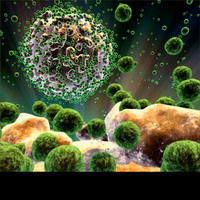 The drugs block a secondary but crucial doorway typically used by the human immunodeficiency virus to enter white blood cells, which are important in the immune system.

The FDA advisers recommended that Pfizer further study Celsentri's interaction with other drugs and its effects on women and minorities. The group's advice is nonbinding, but the FDA generally follows it.

The FDA and Pfizer have cited studies showing that adding Celsentri to a traditional HIV treatment regimen was more effective in dropping the virus below detectable levels. HIV is the virus that causes AIDS.

FDA concerns about the entire class of drugs include the possibility of greater risk of infection, lymphoma or liver damage in HIV patients. The drugs also have been linked to heart rhythm changes in laboratory animals.

FDA reviewers noted no increase in lymphomas or infections among patients given Celsentri, but said there was a modest increase in liver problems.

Pfizer said its analyses of studies of the drug found no significant impact on the heart, and no increased incidence of liver problems, cancer or infection compared with treatment involving other HIV drugs.

Most worrisome is that the drugs could accelerate a shift from one variant of HIV to another, a problem most often seen in the sickest AIDS patients. Patients on Celsentri probably would have to be monitored to determine whether the drug is driving such a shift.

Researchers have known for more than a decade that people who lack a working version of the doorway targeted by the drug - the CCR5 receptor - are highly resistant to infection by HIV or slow to develop AIDS once infected.