British anti-terrorist police on Tuesday arrested six people who were suspected of inciting others to commit acts of terrorism overseas and raising funds for terrorism. 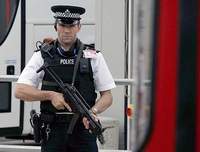 Five of the arrests took place in London and one in Luton, northwest of London, the Metropolitan Police said.

"The arrests form part of a long-term pro-active and complex investigation into alleged incitement and radicalization for the purposes of terrorism, as well as alleged provision of financial support for international terrorism," a police spokesman said on condition of anonymity in line with force policy.

The men were being held at an unnamed central London police station. Police said a number of searches were ongoing in connection with the investigation.

Police did not immediately identify the six.

The British Broadcasting Corporation said, however, that one of the men was believed to be Abu Izzadeen, also known as Omar Brooks, who heckled Home Secretary John Reid last year.

Izzadeen, 31, is the spokesman for the al-Ghurabaa group, which the government banned in July.

He disrupted a meeting between Reid and Muslim leaders in London, which Reid had called to ask Muslim parents to look out for signs in their children of brainwashing by extremists.