Presidential candidates to debate in internet

The 2008 presidential contenders will debate in cyberspace in early next fall. 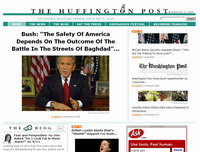 Presidential candidates to debate in internet

The political blog Huffington Post, online portal Yahoo and Slate Magazine will host the debates - one for Democratic candidates, one for Republicans - sometime in autumn, with PBS host Charlie Rose serving as moderator, the sponsors planned to announce Monday.

Voters will be invited to submit questions, and can blog in real time to share their opinions on the candidates' answers.

Arianna Huffington, founder of the Huffington Post, said the idea for online debates was hatched earlier this year at the World Economic Forum in Davos, which bloggers and citizen journalists had been invited to cover.

"It was clear to me, the 2008 campaign was going to be dominated by what's happening on line - new technologies, new media like never before," Huffington said. She then contacted Rose and Slate editor Jacob Weisberg to form a partnership to produce the forums.

Yahoo, the largest provider of online news, will host the debates and provide the technological expertise to produce them.

Candidates will be able to participate from far-flung locations, speaking and interacting with one another before separate video cameras. The video will also appear on the Slate and Huffington Post Web sites.

Major news organizations have already harnessed Internet technology for debates, often Webcasting them and televising them at once. But Web-only debates will be substantively different than televised debates that appear online, participants in the partnership said.

Scott Moore, director of Yahoo's news and information service, compared the debates to the first televised forums between Democrat John F. Kennedy and Richard Nixon in 1960.

Historians believe voters who watched the debate believed Kennedy was the winner, while voters who listened on the radio thought Nixon had won.

It's a really significant, historic opportunity for the candidates to test their debate skills in a brand new format," Moore said.

Democratic National Committee Chairman Howard Dean has agreed to introduce the Democratic debate, Huffington said. She said the campaigns had all been contacted about the idea and most had indicated an interest in participating.