Playwright Peter Morgan and director Michael Grandage decided to stage "Frost/Nixon", a slick, showy docudrama about the historic television interviews between David Frost and the 37th president of the United States. 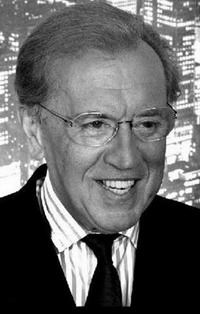 The play, which opened Sunday at Broadway's Bernard B. Jacobs Theatre, is an entertaining if sketchy look at the media and power, specifically presidential power and the possibility of overreaching - something that hasn't lost its relevance today.

It details how Frost, a popular British TV personality, managed to snag Nixon in 1977 for a series of interviews after his resignation from the presidency because of the Watergate scandal. And how Frost got Nixon, who was well paid for his efforts, to open up about what is described in the play as "a third-rate burglary," the break-in at the Watergate hotel and its eventual cover-up.

Morgan is something of an expert at chronicling the lives of real people - on film. He wrote the screenplay for "The Queen," about Elizabeth II, and co-wrote "The Last King of Scotland," a look at African dictator Idi Amin.

So it's no surprise that "Frost/Nixon," first seen last year in a production at London's tiny Donmar Warehouse, is cinematic. The play is awash in urgency, both verbally and physically. Under Grandage's direction, it never stops moving, particularly while setting up the ultimate confrontation between talk-show host and subject. If the description "talk-show host" sounds slightly pejorative, that is what Frost was known as in the late '70s when his career was sputtering.

Nixon, too, had reached a low point, brooding in his seaside California mansion after leaving the White House in disgrace in 1974. Both men needed each other - Frost to re-establish his media credentials and Nixon to repair his tattered reputation.

That they were able to reach an accommodation and respect for each other is part of Morgan's story, and he is fortunate in having two fine actors to portray these wary combatants.

At first, it's a shock to see Frank Langella, one-time matinee idol on Broadway in "Dracula," as the former president. The actor has transformed himself into an approximation, if not an exact physical likeness, of the weary, aging chief executive.

Wearing what looks like a perpetual grimace, Langella moves with an almost simian gait and affects a surprisingly close Nixonian accent. The president was supremely conscious of his looks, insecure about his appearance, particularly on television. And Langella perfectly captures this defensive uncertainty.

Yet the actor's portrait is never cartoonish, and despite his ultimate admission, a degree of sympathy emerges for the man.

Sheen, seen as British Prime Minister Tony Blair in "The Queen," brings a boyish effervescence to Frost, a man seemingly delighted by his own celebrity and his ability to pal around with folks who are even more famous. Yet, despite his affability, he is a bit of a cipher, never quite the fully developed character that Nixon manages to become in Langella's expert hands.

"Frost/Nixon" is not a two-man show, but it might as well be. The production's nearly dozen other actors seem to exist primarily for plot exposition and scene transitions, although Stephen Rowe manages to briefly make impressions as two very different people, super-agent Swifty Lazar and television journalist Mike Wallace.

Others in the cast are primarily used to set up the compelling conversations between Frost and Nixon, which can be seen on a large television screen hanging over the Jacobs stage.

That's where the play really comes alive - juxtaposing the live confrontations with the images projected above the audience. Watching what television devastatingly does to the unraveling former president, particularly in the final interview, neatly underscores the main point "Frost/Nixon" is making. The power of TV creates pretty potent images.