Driving into Manhattan could become an expensive privilege under a wide-ranging city program unveiled to cope with the booming population and ease stress on the environment. 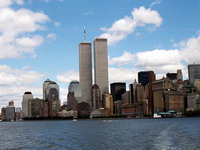 The package of proposals outlined Sunday by Mayor Michael Bloomberg focuses on the city's transportation, energy, water and housing networks that in some cases already are strained beyond capacity by today's 8.2 million people.

"Let's face up to the fact that our population growth is putting our city on a collision course with the environment, which itself is growing more unstable and uncertain," Bloomberg said.

The most controversial idea in the plan, from the mayor's Office of Long-term Planning and Sustainability, is a proposal to charge motorists for driving into Manhattan below 86th Street on weekdays from 6 a.m. to 6 p.m. Trucks would be charged $21 (15.43 EUR) a day and cars would be charged $8 (5.88 EUR), on top of the city's already expensive parking.

Officials say it would reduce traffic and pollution while generating money for other transit projects - nearly $400 million (294 million EUR) in just its first year.

It is similar to a system that London has used since 2003, and officials there say it has significantly reduced congestion.

The scheme, known as congestion pricing, is applauded by environmentalists and alternative transportation groups, but is politically tricky for New York City because it would have to be enacted by the state Legislature, and many lawmakers from outer boroughs and the suburbs may not support it.

It is also certain to face a tough fight by organizations like the American Trucking Association.

"It will be a real problem for operations for trucking companies and shippers, including all the retailers in Manhattan, which is substantial," said ATA spokesman Clayton Boyce. "And all the people who get FedEx and UPS deliveries will have problems and will bear extra expense, so we definitely see problems with it."