While campaigning for the 2008 elections in South Carolina on Wednesday, McCain responded to a question about how to deal with Iran by breaking into the melody of the Beach Boys song "Barbara Ann" but changing the lyrics to "Bomb Iran." 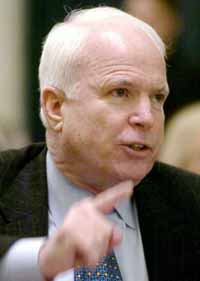 The Republican from Arizona was asked for his reaction to any negative response to the joke when he arrived in Las Vegas for a fundraiser Thursday night.

"Please, I was talking to some of my old veterans friends," he told reporters. "My response is, Lighten up and get a life."

When reporters asked if the joke was insensitive, McCain said: "Insensitive to what? The Iranians?"

McCain's joke, which was circulating on the Internet, was prompted by an audience question in Murrells Inlet, South Carolina, about whether he believes the U.S. should send Iran "an airmail message to Tehran."

After his joke, McCain turned serious and said that he agrees with President George W. Bush that the United States must protect Israel from Iran and work to prevent Iran from acquiring nuclear weapons. McCain has long said that the military option should not be taken off the table but that it should be used only as a last resort.

The episode echoed President Ronald Reagan's 1984 quip at the height of the nuclear arms race with the Soviet Union when he said: "My fellow Americans, I'm pleased to tell you today that I've signed legislation that will outlaw Russia forever. We begin bombing in five minutes."

Reagan was testing a microphone before his regular Saturday radio address.