Crews trying to free two Maryland miners spent more than two days beneath a huge mound of rocks and dirt and reached the backhoe one of the men was in. 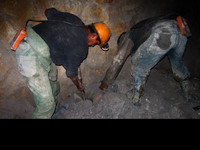 Workers found the heavy vehicle shortly after 6 p.m. (2200 GMT), but it could take some time to gingerly remove the unstable remnants of a collapsed wall that surround it, said Bob Cornett, acting district manager for the federal Mine Safety and Health Administration.

"All we can see is a piece of it," he said. "They'll have to do it slowly" to avoid further damage to the vehicle, he said.

Cornett said he told family members of the progress. "We said a prayer," he said. "If I was in their shoes, I would have hope."

Cornett said earlier Thursday that he believed the miners were operating heavy machinery side by side and the vehicles would found near each other.

The men were trapped Tuesday morning when the bottom of a massive wall at the open pit coal collapsed on them and the equipment they were operating. Trucks have been hauling about 2,500 tons (2,300 metric tons) of debris each hour, with some lengthy delays, from the pile at the western Maryland mine since then to try to reach them.

Efforts bogged down earlier in the day when excavation equipment got stuck in mud. Work also stopped for several hours early Thursday so explosives could be used to clear a dangerous area.

Despite the delays, Cornett said the agency still considers the operation a rescue mission. He cited two recent mining catastrophes, the July 2002 Quecreek mine accident in Pennsylvania where nine miners were rescued after 4 days and the Sago mine tragedy last year in West Virginia where 12 miners died and one survived.

"We are getting prepared," Cornett said. "We are trying to get everyone ready."

The miners were working at the bottom of the pit when the wall collapsed. One was operating a tracked backhoe and the other was using a loader. Both have CB radios, although the men have not communicated with anyone since the collapse.

Cornett said he did not believe either machine was equipped with an emergency breathing apparatus. The so-called "self-contained self-rescuers" provide an hour of oxygen.

The site is in a rugged area of mountains called Georges Creek and is near the Eastern Continental Divide. The region is dotted with abandoned mines and fading former company towns.

The mine has had no fatal injuries since at least 1995 and was not cited for violations in its most recent inspection, which began March 5, according to MSHA. The mine employed 51 people at the end of 2006 and produced nearly 653,000 tons of coal last year.

Tri-Star Mining Inc. had 15 to 20 people working on the rescue. Joining them were a crew of eight from MSHA and local firefighters.