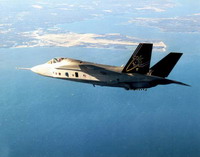 Defense Under Secretary Kenneth Krieg approved funding for two F-35 aircraft and advanced materials to build 12 other planes after a senior advisory panel signed off on terms of the deal.

Bethesda, Maryland-based Lockheed Martin will build the F-35s for the Marines, Air Force and Navy. At an expected cost of $276 billion (202.93 billion EUR) when the entire project is complete, it will be one of the largest defense projects ever.

"We're pleased with today's decision for the first full funding of the F-35 production aircraft," said Tom Jurkowsky, a Lockheed spokesman. "This decision signals the true beginning of more than 30 years of production."

Shares of Lockheed Martin fell 74 cents to close at $95.63 on the New York Stock Exchange.