Jury has doubts as to guilt of preacher's wife

Though a preacher's wife is convicted of killing her husband, she could spend little time in prison if the jury decides she did not shoot him on purpose. 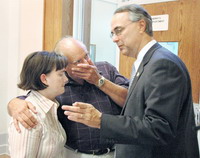 Jury has doubts as to guilt of preacher's wife

Mary Winkler could be found guilty of any of five homicide charges. The least serious, criminally negligent homicide, would result in a one- to two-year sentence, and she might be allowed to serve the entire term on probation.

Mary Winkler told jurors that her husband, Matthew, abused her physically and sexually, but she said the shotgun went off accidentally as she pointed it at him.

The prosecution said it was ludicrous to suggest the shooting was an accident and argued she should be convicted of first-degree murder with an automatic 60-year prison sentence.

Her attorney said Mary Winkler was waiting for the verdict at a friend's house.

"I can't imagine what (defendants) go through," defense attorney Steve Farese said. "I can barely stand here myself."

Matthew Winkler, a 31-year-old preacher at the Fourth Street Church of Christ, was found in the church parsonage fatally shot in his back in March 2006. One day later, his wife was arrested on the Alabama coast, driving the family minivan with their three young daughters.

If she gets the maximum sentence, she would have to serve at least 51 years in prison.

Farese argued the prosecution never proved Mary Winkler intended to kill her husband, but he left open the possibility that she could have been guilty of a lesser crime.

Winkler said her husband had punched her in the face, kicked her at times, refused to grant her a divorce and forced her to perform sex acts she thought were unnatural. Shortly before the shooting, she said, he held his hand over their 1-year-old daughter's mouth and nose to stop her crying.

Prosecution witness described Matthew Winkler as a good husband and father, and the couple's 9-year-old daughter testified she never saw her father mistreat her mother. Mary Winkler also said under cross-examination that her husband did nothing for which he deserved to die.

The jury includes two men and 10 women, including one who said she had been a victim of domestic abuse. The judge didn't reveal the jury makeup until Thursday to ensure the four alternates paid close attention to testimony.

For second-degree murder, which does not require premeditation, Mary Winkler would be sentenced to 15 to 25 years in prison. A verdict of voluntary manslaughter, which suggests the crime was committed in an irrational state, or reckless homicide likely would result in a sentence of only a few years in prison.