A Kentucky judge was suspended for 15 days for jailing 17 Hispanic immigrants for traffic infractions and then denying them bail. 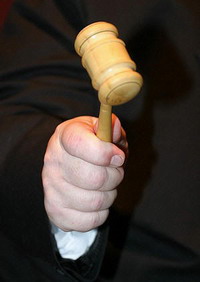 The state Judicial Conduct Commission on Thursday ordered Judge Sue Carol Browning, who oversees cases in two western Kentucky counties, off the bench from April 28 through May 12.

Some of the immigrants were held for as long as three weeks in August and September before another judge freed them. Circuit Judge Tyler Gill ruled in October that the men were "jailed without reason."

The commission said Browning violated the canons of judicial conduct by instructing police officers to arrest immigrants without identification during traffic stops, then denying the men a right to bail.

"The Commission has concluded that it should have been obvious to Judge Browning as a sworn judge to support the Constitution that her denial of the right to bail in 17 cases was seriously wrong," commission Chairman Steven Wolnitzek wrote in the decision.

Browning, who had no prior infractions with the commission, agreed to the suspension. She did not immediately return a call for comment.

Browning has previously said that she jailed the defendants because she had little information about their residency status or criminal history. She also said she had seen the same defendants repeatedly in court and that some gave false names when they were arrested.

Many of the immigrants had appeared voluntarily in court in response to summonses issued during traffic stops.