The United States was intensifying efforts Thursday to defuse Russian anger and allay European concerns over plans to extend anti-missile defenses to Europe. 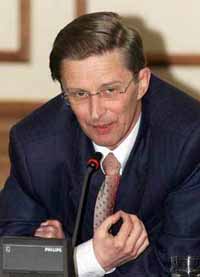 The strategic defense shield was needed to deter Iran and others in the Middle East from developing long range rockets that could threaten Europe or North America, the director of the U.S. Missile Defense Agency said.

"Nations like Iran, Syria and others see these weapons as very valuable weapons because historically there has no been defense against those," Lt. Gen. Henry A. Obering told a conference Wednesday in Poland before talks with Russia and NATO allies.

"But we are at a point now that we have a defense against these weapons."

Obering and Eric Edelman, the U.S. undersecretary of defense for policy, will brief allies and Russian officials at NATO headquarters.

Moscow has denounced the plan to install 10 interceptor missiles in Poland and radar scanners in the Czech Republic as a potential threat to its military deterrent.

Iran would not have the capability to produce intercontinental ballistic missiles in the "foreseeable future," Russia's Deputy Prime Minister Sergei Ivanov insisted in an interview with London's Financial Times.

"Since there aren't and won't be (Iranian) ICBMs, then against whom, against whom, is this system directed? Only against us," the paper quoted him as saying. He warned that the U.S. plans risked provoking a new arms race.

"Whenever the shield is strengthened, the sword is strengthened afterward," he told the FT. "This is the eternal competition and here there is never going to be a winner."

Many NATO allies have also expressed concern that the U.S. plan risks creating new tensions in Europe by alienating Russia, without necessarily adding to security because many share doubts about Iran's ability to develop long-range missiles, or about the effectiveness of the missile defenses.

Germany's government appears divided on the issue with Chancellor Angela Merkel urging NATO to take up the discussions for a missile defense shield while her Social Democrats coalition partners have voiced strong criticism of the U.S. plans. French officials have also cast doubt on the U.S. plan, saying NATO allies' nuclear strike force would be enough to deter any missile attack.

Such divisions have prevented the 26-nation NATO alliance from developing its own plans for strategic missile defense, although its leaders ordered further study last year into the possibility of developing an alliance shield.

At Thursday's talks, U.S. officials are expected to offer cooperation with Russia and NATO allies in building up strategic defenses, stressing that all could face the danger of a rogue missile attack on their territory.

"We want to cooperate with Russia," Edelman, said recently in Washington. "The threat is one that they face as well as one that we face. In fact, they come within range of these missiles before we do."

NATO is already working with Russia on plans to develop battlefield protection against short-range missiles. That NATO system, due to be ready by 2016, could be combined with the U.S. long-range missile defenses to provide territorial cover for European nations, alliance officials have suggested.

That could allay concerns that the U.S. installations would create a two-tier defense system within NATO by offering a protective umbrella to much of northern Europe while leaving southern allies such as Turkey, Greece and Bulgaria exposed.