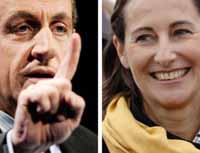 Sarkozy, the nominee for President Jacques Chirac's governing party, remains leader of the 12-candidate field, with 28.5 percent of respondents saying they support him for Sunday's first round, according to the poll in daily Le Figaro. Royal tallied 25 percent - but the margin of error in surveys of that size was plus or minus three percentage points, meaning they are in a dead heat.

Still trailing - but gaining ground - were centrist Francois Bayrou at 19 percent and far-right nationalist Jean-Marie Le Pen at 14 percent, according to the poll.

But the survey said that only 54 percent of voters were fixed in their choice with only three days to go, increasing speculation about which two candidates will qualify for the decisive runoff on May 6. Candidates are required to stop campaigning by midnight Friday.

Royal sought to prop up her base Thursday after several Socialist Party elders - nicknamed the "elephants" - suggested she could not win alone and that she strike an alliance with Bayrou to keep Sarkozy out of office.

"I'm keeping my calm and inner strength," said Royal, aspiring to become France's first woman president, on RTL radio. "Some elephants haven't done everything to simplify my task ... some of them still have trouble accepting my nomination."

Sarkozy trained his fire against Bayrou, a longtime center-right politician who has sought to bill himself as a centrist. Most polls show that Bayrou is the only candidate who could defeat Sarkozy in the runoff.

"I knew him for years as a man of the right. For some time now, he's been changing and has become the candidate of the left," Sarkozy said, referring to Bayrou. "The only question is: Did he ask voters if they agree?"

The telephone poll of 1,000 registered voters by TNS-Sofres poll for Le Figaro, LCI television and RTL radio was conducted Monday and Tuesday. No margin of error was provided, but for most polls of that size it is plus or minus three percentage points.