Tallest building of Denmark to be constructed in Aarhus 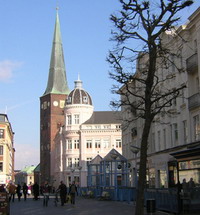 Tallest building of Denmark to be constructed in Aarhus

The tallest building of Denmark will be constructed on the waterfront in Aarhus, the second largest city of the country.

Construction of the new building, housing offices, shops and apartments, is to start in January and be ready for occupation in 2010, Aarhus city officials said. The city, 200 kilometers (125 miles) northwest of Copenhagen, has approximately 300,000 inhabitants.

The skyscraper is to be one of the first elements of a new urban area on the harbor. Over the next two decades, the city's container terminal on the harbor's northern tip will be turned into a new neighborhood with residences, offices and recreational areas.