Doctors have removed a bullet from the heart of a Vietnamese soldier nearly four decades after he was shot by U.S. troops during the Vietnam war, doctors said Monday. 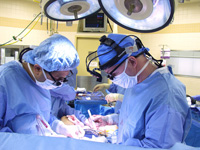 "It is the strangest case that I have ever seen," Hien said. "Normally a person with a bullet in his heart would die immediately if they didn't have surgery right away."

Hung said he feels much better now, and the pain in his chest had eased.

"I was very lucky to survive," he said from his hospital bed. "People believe in their fate and I do too."

Hung was shot during a 1968 battle in Quang Tri province, near the former Demilitarized Zone that separated North and South Vietnam. He had been living with chronic pain ever since.

"The operation was even more successful than we had expected," said Hung's daughter, Le Thi Mai, 33, who visited her father at the hospital on Sunday. "When I spoke to him, he was very happy."

One year after Hung was shot, doctors tried unsuccessfully to remove the bullet, which was 2.5 centimeters (just over an inch) long.

Hien said the bullet went through Hung's stomach, damaged his cardiac valve and came to rest at the back of his heart.

Surgeons replaced Hung's damaged valve with an artificial one.

Doctors said Hung would rest in the Hanoi Heart Hospital for several more days before returning to his home in neighboring Ha Tay province.

"It's a miracle that he survived with a bullet in his heart," said Hoang Thi Ngoc Huong, the hospital's deputy director. "We have had thousands of heart surgeries, but this is the first time we experienced something like this."

Hung, who is retired, worked as an administrator at a Hanoi medical school after the war. He has three grown children and lives with his 56-year-old wife.

He fought with the communist North, which defeated the army of the former South Vietnam in 1975. The war claimed the lives of 3 million people, including 58,000 U.S. troops.