Britain's defense secretary faces questions in the House of Commons on Monday about the detention of sailors and marines in Iran, and the decision to allow them to sell their stories to the media. 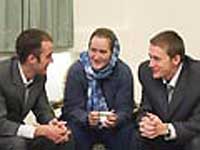 Defense Secretary Des Browne has been under fire because his ministry permitted the crew to accept payment for their stories - a decision he reversed after two days - but also faces questions about why the crew was not given more protection and why they did not resist their captors.

Iranian revolutionary guards detained 15 British sailors and marines who had been searching a merchant ship on March 23 in what Britain insisted were Iraqi waters. Iran accused the British crew of trespassing on Iranian waters. They were released after nearly two weeks.

Crew members have been criticized at home for making statements while in captivity saying they had strayed into Iranian waters and apologizing.

Only two of the crew members - including the sole woman, Faye Turney - made deals to sell their stories. The deals came under heavy criticism, not least from newspapers which were outbid for exclusive rights.

Opposition Conservative Party leader David Cameron accused the defense ministry of "putting first the importance of a good headline, a good bit of PR ... but they were putting at risk the long-term reputation of our armed forces."

Liberal Democrat leader Sir Menzies Campbell, however, said the "shambles" about the media deal should not distract the Commons from examining how the crew were seized.

"Des Browne must tell the House of Commons what assessment had taken place with regards to the level of support necessary for the operation and the threat posed by Iranian activity," Campbell said.

"He must also make clear whether these troops had been trained to deal with capture," he said.

Prime Minister Tony Blair has said that permitting the crew to negotiate with media organizations was not a good idea, but on Sunday he said "the essential thing is that 15 of our personnel were taken captive and they were released safe and unharmed."