Kings and royalty from South Africa's many different tribes will gather Monday to witness the grandson of former South African president Nelson Mandela reclaim the family's position as traditional leaders. 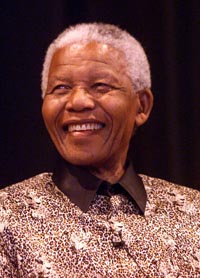 Mandla Mandela, 32, will be installed as head of the Mvezo Traditional Council by the King of the AbaThembu, Zwelibanzi Dalindyebo, one of six kings of the Xhosa people.

It will be the first time in nearly 70 years that a member of Mandela's family from the royal Madiba clan will take up the mantle of traditional leadership.

Nelson Mandela, 88, renounced his claim to the role to become a lawyer and dedicate his life to fighting apartheid. His father, Henry, had been deposed in the early 1900s after he defied a summons from a local magistrate.

"I am relishing the prospect of being a custodian of the abaThembu custom and I look forward to this position with respect, pride and passion," Mandla Mandela said in a statement ahead of the event.

"This is really Nelson's position but because of his advanced age it was decided that the honor would be bestowed on his successor," said Patekile Holomisa, head of the Congress of Traditional Leaders of South Africa.

The ceremony, known as ubeko or anointment, will take place at the Mvezo Great Place, the seat of the Mandela house.

Set in the Transkei, the picturesque Xhosa homeland with its rolling hills and turquoise huts, the ceremony is expected to be a colorful affair with at least 10 oxen slaughtered for the guests' enjoyment.

Holomisa said Mandla Mandela will be installed as an inkosi or chief of the council and will also be introduced to ancestral spirits, which play an important role in traditional African religion and customs.

"He is the link between the king, the ancestors and his people," Holomisa said.

Mandla Mandela will be draped with a leopard skin, the symbol of royalty, and be given a stick to symbolize authority, he said.

The political science student who graduated from Rhodes University last week will also be issued with a certificate authorizing him to carry out his duties. These include hearing disputes as well as trying certain criminal and civil cases.

South Africa, with its 11 official languages, has a multitude of ethnic people and groupings and traditional ties are strong especially in rural areas.

"I will be living among my people and I look forward to assisting with the numerous challenges that we face including social, poverty and health issues," Mandla Mandela said in the statement.

The country's Constitution protects traditional laws and customs, and Houses of Traditional Leaders act in an advisory capacity to the government.

"Monarchy and tribal leadership have a substantial role to play in the continued democratization of the country and I am thankful that this role will allow me an opportunity to follow in my grandfather's footsteps," Mandla Mandela said.