Russian opposition leader Garry Kasparov, the former world chess champion, was detained by police Saturday as supporters of his organization tried to hold a forbidden protest march in central Moscow. 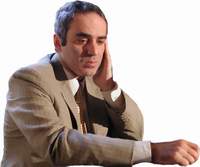 An Associated Press photographer saw Kasparov inside a police van, waving and smiling to journalists clustered outside on the edge of Pushkin Square.

Kasparov heads the United Civil Front opposition organization, which aimed to hold a massive anti-Kremlin protest march on Saturday in alliance with other opposition groups who come together under the rubric of Other Russia to protest.

Opposition forces make a wide array of complaints against the Kremlin on political and economic issues, claiming particularly that the Kremlin is suppressing democracy.

Thousands of police, many of them in helmets and wielding truncheons, were at the square, and scores of people were detained. Many of those detained went quietly, but some struggled and were forced into police vehicles by officers holding truncheons around the detainees' necks.

Another prominent opposition figure, former Prime Minister Mikhail Kasyanov, was blocked by police from entering Pushkin Square and several dozen of his supporters were detained, the Interfax news agency reported.

Other Russia has also called for a massive march in St. Petersburg on Sunday. Like the march in Moscow, authorities have forbidden that action. Three previous actions - all called Dissenters' Marches - were either broken up harshly or smothered under a massive police presence in Moscow, St. Petersburg and Nizhny Novgorod in recent months.

The weekend marches could be a key test of the Russian opposition's determination before parliamentary and presidential elections - and a test of how harshly police may move to block their actions.

If the weekend's protests draw large crowds, they could give momentum to Russia's beleaguered opposition and fuel a long season of demonstrations against the government, which critics say has rolled back democracy.

If they founder, it could signal further irrelevancy for the opposition - fractured by years of infighting - as the country moves toward parliamentary elections in December and next year's critical presidential vote.

Some 9,000 police were on duty for the march in Moscow. Authorities gave Other Russia permission to hold a rally on Turgenev Square, but denied their request to gather at Pushkin Square, which is one of Moscow's most well-known and visible public places.

Other Russia vowed to defy the ban and to gather at Pushkin Square and then march to the other square, about 2 kilometers (1.2 miles) away.

"Let them beat me, it won't change a thing," said German Severtsev, a 72-year-old retiree who said he planned to take part in the march because his pension is inadequate and he can't find work to supplement his income.

Russia's mainstream liberal parties, which some critics say have been co-opted by the Kremlin, have largely kept their distance. Grigory Yavlinsky, who heads the Yabloko party, refused to participate in the Moscow march, saying in a statement that "the ideological and political composition of the these actions are unacceptable for Yabloko."

In the run-up to the demonstrations, Moscow's city council passed strict new regulations on rallies - including a rule limiting the density of protesters to no more than two people per square meter (10 square feet).

This week, prosecutors seized recordings of an Ekho Moskvy radio interview with Eduard Limonov, whose National Bolshevik Party is known for its street theater and political pranks targeting Putin.

Putin also brought stability to Russian society after a decade of chaos, and has presided over rapid economic growth. Polls rate him as by far the most popular political figure in Russia.