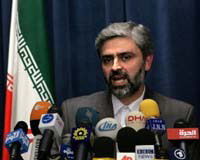 The French academic, who had not been allowed to leave Iran for over 2 month, can now return home, the Iranian News Agency reported Thursday.

Stephane Dudoignon, arrested in southeastern Iran on Jan. 30 after photographing a Shiite religious procession in the sensitive region of Sistan-Baluchestan, may leave Iran as soon as Friday, said Mohammad Ali Hosseini, an Iranian foreign ministry spokesman.

"A French national whose passport, because of some problems, was confiscated, received permission for departure," Hosseini told IRNA.