Hundreds of airline flights were grounded, a major league baseball game was called and six people were killed in accidents on icy roads as yet another spring snowstorm hit the upper Midwest. 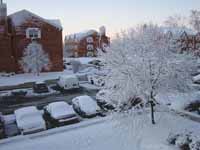 North Dakota and South Dakota both measured about 7 inches (18 centimeters), and 5 inches (13 centimeters) fell in Madison, Wisconsin on Wednesday.

Six people were killed in two separate accidents in Iowa, including a woman and her two children when their minivan collided with another minivan in the state's south-central region.

Wednesday's Houston Astros at Chicago Cubs game was postponed because of the storm. During the weekend, heavy snow wiped out scheduled Angels-Indians games for four straight days at Cleveland, and their contest was finally moved to Milwaukee's enclosed field.