Situation for civilians 'ever-worsening' in Iraq 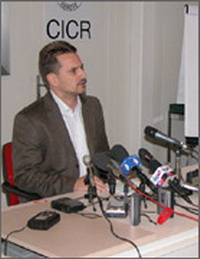 Situation for civilians 'ever-worsening' in Iraq

The multinational forces lead by USA has improved the security in some places of Iraq, nevertheless the situation for civilians is "ever-worsening",  the international Red Cross said Wednesday.

It is difficult to determine the numbers of people killed in shootings, bombings and military operations, but the overall picture of what is happening the country has been steadily deteriorating, with numbers of refugees swelling, medical staff fleeing and other problems growing, a key official said.

"It is clear that the security situation has improved in certain instances," especially in southern Iraq, said Pierre Kraehenbuehl, director of operations of the International Committee of the Red Cross, or ICRC.

But the central region, including Baghdad, remains greatly affected, despite American efforts to secure the capital.

"Whatever operation that is today under way, and that may be taken tomorrow and in the weeks after, to improve the security of civilians on the ground may have an effect in the medium term," Kraehenbuehl told reporters. "We're certainly not seeing an immediate effect in terms of stabilization for civilians currently. That is not our reading."

He said it was so dangerous for Red Cross workers to move around in Baghdad, however, that "we don't have on a day-to-day basis a full picture of absolutely every situation."

"The conflict in Iraq is inflicting immense suffering on the entire population," said the report. "Every day dozens of people are killed and any more wounded."

The ICRC continues to operate in Iraq even though it has cut back operations since attacks on its staff and Baghdad headquarters in 2003. It has 415 Iraqis working for it in the country and has an additional 57 international staff based in Iraq and Amman, Jordan, but relies on the affiliated Iraqi Red Crescent for much of its information.

Based on the Iraqi society's count, some 600,000 Iraqis have fled their homes since the upsurge in sectarian violence in February 2006, Kraehenbuehl said. Medical professionals have been fleeing the country after cases where their colleagues were killed or abducted.

"Hospitals and other key services are desperately short of staff," Kraehenbuehl said. "According to the Iraqi Ministry of Health, more than half the doctors are said to have already left the country."

Thousands of bodies lie unclaimed in mortuaries, with family members either unaware that they are there or too afraid to go to recover them, he said.

One of the key jobs of the ICRC is to visit detainees, and the number in custody has been growing as well, Kraehenbuehl said.

The ICRC regularly visits people held by the multinational forces, and has seen 16,500 since January. Last year some 32,000 detainees were visited by the neutral agency, which also has access to those held by the Kurdish regional government. The ICRC has yet to reach agreement with the Iraqi authorities on visiting their detainees.