For months, Larry Birkhead was the mysterious other man, the little known Los Angeles photographer who emerged to tell anyone who would listen that he was really the father of Anna Nicole Smith's baby. 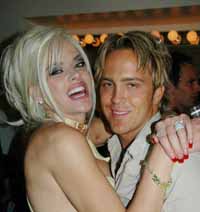 By Tuesday, when he finally proved his claim through a DNA paternity test, it quickly became evident that little was known about the 34-year-old Kentucky native with the surfer-dude good looks.

He has a Web site says nothing about his personal life and a profile on the networking site MySpace.com is private.

Public records show he was born in Kentucky in January 1973. He is reported to have a twin brother, but a publicist for his former attorney, Debra Opri, declined to confirm that Tuesday or say how many brothers and sisters Birkhead has. Publicist James Levesque did say Birkhead has no other children.

Although fatherhood will be a new role for Birkhead, he has said it is one he is prepared for.

"Most definitely. I'm capable of it. I have nieces and nephews," he told CNN's Larry King in January, adding his siblings have named him as the guardian who would care for their children if anything happened to them.

Birkhead has said he met Smith, a former Playboy Playmate of the Year, at a Kentucky Derby party in 2003 but that they didn't start dating until he saw her at the same event the following year.

She had lost weight, was much friendlier than she had been the year before and invited him to accompany her to other events to take photos "and one thing led to another," he told Fox's Greta Van Susteren in January.

"We had, you know, even though it sounds like we battled and battled, but we had a great time in our relationship," he told Van Susteren.

He has said he and Smith remained together until May 2006 when she was five months pregnant with Dannielynn.

Howard K. Stern, Smith's former attorney and companion at the time of her death in February, is listed on Dannielynn's birth certificate as her father. Birkhead has said Stern was jealous of his relationship with Smith and deliberately broke them up.

Smith, 39, was found unresponsive on Feb. 8 in a Hollywood, Florida hotel room, and was pronounced dead shortly afterward.

For months, Birkhead has appeared before the TV cameras as the friendly, often exuberant figure in the paternity case, reiterating again and again that he would eventually prevail in his efforts to prove he was Dannielynn's father.

Before his myspace profile was set to private he would sometimes post a smiley face next to messages on his blog that said he was remaining upbeat.

On Tuesday in the Bahamas, he appeared nervous in front of the cameras, but not so much that he couldn't resort to another moment of playfulness.

"I hate to be the one to tell you this," he began as he addressed the cameras somberly after leaving a closed-door court hearing where his paternity was announced. Then he grinned, raised his arms in triumph and added, "But I told you so!"