Sexual abstinence educators try to keep Congress from cutting back their $176 million (131.09 million EUR) program to convince young people that saying no to too-early sex is the best policy. 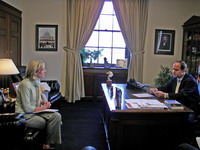 Democratic lawmakers have introduced legislation to promote comprehensive sex education instead of abstinence-only curriculums. They want to send money to schools that stress abstinence while also instructing students about the health benefits and side effects of using contraceptives.

The abstinence groups do not plan to lose any of their federal money without a fight: They have opened their own trade association near the Capitol.

Valerie Huber, executive director of the National Abstinence Education Association, said the group's formation is not a response to Democrats taking control of Congress. In U.S. politics, Democrats normally are considered much more liberal on social issues than Republicans.

"It really has nothing to do at all with any current political climate, just the evolution of the field of abstinence education," she said.

Huber acknowledges, however, that opening the Washington office is occurring at an important time.

"We recognize there's been a change" in control of Congress, which controls the government's money. "But that doesn't mean there's a change across America," Huber said.

Besides opening their own trade association, abstinence educators hired a public relations firm with a long list of Republican and conservative clients.

"They've had smooth sailing for seven years," said James Wagoner, president of Advocates for Youth, an organization that promotes sex education programs. "Their hiring of this firm shows that they know the honeymoon with Congress is over."

The abstinence association will make its case to lawmakers and the public about a program that Huber said is often misunderstood and mischaracterized.

The second largest pot of money, $50 million (37.2 million EUR), goes through the states, which match that funding with $3 (2.23 EUR) for every $4 (2.98 EUR) they get from the federal government. The programs teach that sex outside marriage is likely to be psychologically and physically harmful.

The program, known as Title V, is set to expire this year, which will set the stage for a potential showdown over the program's future direction and financing levels.

Wade Horn, who oversaw the two largest abstinence education programs until he resigned last week, predicted Congress will give states more flexibility in determining how Title V money is to be spent.

He does not believe Congress will make major funding cuts.

"I think it's going to evolve, but I don't think it's going to go away," he said. "I've seen some bills introduced by Democrats that suggest they want a separate fund dedicated to comprehensive sex education, but my sense is that it won't be at the expense of abstinence education. I think it's a matter of both, not one or the other."

Democratic Sen. Frank Lautenberg sponsored the legislation cited by Horn. He said he does not believe abstinence education is working. His goal is to make both types of programs available, and he believes schools gradually will shift their focus to the comprehensive sex education programs.

Teen birth rates have been on the decline since 1991. The reasons can be partially explained through the National Youth Risk Behavior Survey, which is compiled by the Centers for Disease Control and Prevention.

For youth in the last four school years before university, the percentage of youth reporting ever having had sexual intercourse fell from 54.1 percent in 1991 to 46.8 percent in 2005.