A federal judge has rejected a U.S. government request to delay an order granting bail to anti-Castro militant Luis Posada Carriles, who is held on immigration charges. 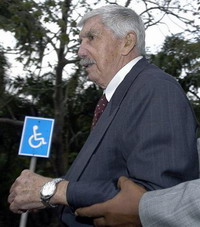 U.S. District Judge Kathleen Cardone issued the opinion late Monday. On Friday, she ruled that Posada should be freed pending his scheduled May trial on charges that he lied to immigration authorities in a bid to become a naturalized citizen.

A federal immigration judge has ruled that Posada, 79, should be deported but has ordered he cannot be sent to Venezuela, where he is a naturalized citizen, or Cuba, where he was born. Governments in both countries want Posada returned to Venezuela to stand trial on charges that he was in Caracas when he plotted the deadly 1976 bombing of a Cuban jetliner.

Posada, a former CIA operative, has been in U.S. custody since May 2005, when he was arrested after telling authorities he sneaked across the U.S. border from Mexico. Federal authorities claim he actually came via a boat from Mexico.

He was arrested in January after being indicted on the criminal charges of lying on his citizenship application.

Lawyers for the government on Monday filed another motion asking Cardone to either reverse her decision or hold a hearing about the origin of property Posada could use to post his $250,000 (186,205 EUR) bond. Cardone has not yet ruled on that motion.

Previously, Millan has said that if the bond order was upheld he was not sure if Posada immediately would be released because of a pending deportation order.

Monday, Venezuelan officials renewed calls to either extradite Posada or try him in the United States.

"If the White House doesn't want them to free Posada, the U.S. government can easily prevent his release," lawyer Jose Pertierra said in a phone interview from his Washington office. "Either extradite him to Venezuela or try him in the United States for the 73 counts of first-degree murder."