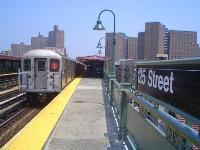 Three times, in 1972, 1973 and 1974, mayors, governors and others joined in groundbreaking ceremonies for the Second Avenue subway running north-south on Manhattan's east side. But each time, the project came to a halt.

The Metropolitan Transportation Authority said that will not happen again, if it can help it.

"The prospects are exceptional," said Elliot Sander, the MTA's chief operating executive. "We have three-fourths of the funding and enormous political will to complete the first phase of the project, and a strong consensus in the business and civic communities and among senior policy officials in transportation all of whom believe this is a critical step to position New York City for the future."

The MTA expects to proceed with the second and later phases that will ultimately extend the line from 125th Street in Harlem to Hanover Square in lower Manhattan. Costs of the entire project and a completion date are not yet known.

The legacy of the Second Avenue subway is one of false starts. In the 1940s, money was appropriated for the project, and the city even invested in shiny new aluminum cars, but the construction funds were diverted to pay for repairs of the existing transit system.