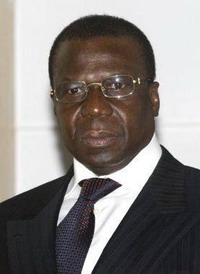 Vieira named Martinho N'Dafa Cabi, a leader of the PAIGC, the main opposition party which had been instrumental in calling for the removal of the former prime minister.

In an address on national radio late Monday night, Vieira also confirmed the departure of the ex-premier, Aristides Gomes.

Last month, Guinea-Bissau's parliament passed a motion to impeach Gomes, with 54 out of 85 parliamentarians voting in favor, saying a change was needed to pull the country out of its economic spiral. Prior to the vote, the country's three leading political parties had signed a pact saying Gomes' government needed to be replaced.

Gomes announced his resignation on March 29, but it was unclear if Vieira, a close ally of Gomes, would accept his resignation and name a new premier, as required by the country's constitution.

Vieira was elected last June in the first presidential vote since a 2003 military coup toppled democratically elected President Kumba Yala. He appointed his protege, Gomes, as prime minister, infuriating the PAIGC, which called the appointment unconstitutional.

Guinea-Bissau is deeply impoverished and has been wracked by coups since independence from Portugal in 1974.