Arnold Schwarzenegger is to address the annual conference of Britain's Conservative Party, the party said Sunday, citing the California governor's committment to the environment - an issue the British opposition hopes to claim for its own. 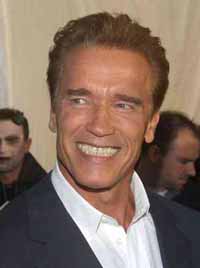 David Cameron, the Conservative leader, has been attempting to reposition his party - once led by Margaret Thatcher and Winston Churchill - in the center, to the dismay of some of the Conservative faithful. But the party, which last won a general election 15 years ago, has seen an increase in support in some polls in Britain, where the government is dominated by Prime Minister Tony Blair's Labour Party.

Cameron has seized the environment as his party's key issue. He changed the Conservative party logo from a torch to a tree, and has been photographed cycling to work at the House of Commons.

"Governor Schwarzenegger led a dramatic revival of his party's fortunes in California and as governor he has shown tremendous leadership - above all in pioneering measures to protect the environment, reaching out to political opponents in doing so," Cameron said in a statement.

Schwarzenegger, a Republican, signed California legislation last year imposing a first-in-the-nation emissions cap on utilities, refineries and manufacturing plants, with a goal of cutting greenhouse gases to 1990 levels by 2020. And Schwarzenegger and Blair announced plans to work toward a possible joint emissions-trading market.

Schwarzenegger's spokesman said he was honored to be invited to participate in the congerence.

"There's a long history of the Republican party in the U.S. and the Conservative Party in Britain working together on important issues," Adam Mendelsohn said. "There's a new generation of leaders showing that protecting the environment brings economic strength, and is in the tradition of the conservative party," he said.

In January, Schwarzenegger declared himself to be a centrist at the inauguration for his second term as governor.

The Conservative Party conference will be held in Blackpool, in northwest England, from Sept. 30 to Oct. 3.