A rueful reflection on what might have been, an Iraqi government insider shows in 500 pages the U.S. occupation's "shocking" mismanagement of his country - a performance so bad, that by 2007 Iraqis had "turned their backs on their would-be liberators." 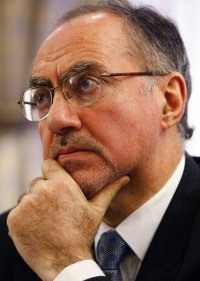 Allawi writes with authority as a member of that "new order," having served as Iraq's trade, defense and finance minister at various times since 2003. As a former academic at Oxford University before the U.S.-British invasion of Iraq, he also writes with unusual detachment.

The U.S.- and British-educated engineer and financier is the first senior Iraqi official to look back at book length on his country's four-year ordeal. It is an unsparing look at failures both American and Iraqi, an account in which the word "ignorance" crops up repeatedly.

First came the "monumental ignorance" of those in Washington pushing for war in 2002 without "the faintest idea" of Iraq's realities. "More perceptive people knew instinctively that the invasion of Iraq would open up the great fissures in Iraqi society," he writes.

What followed was the "rank amateurism and swaggering arrogance" of the occupation, under L. Paul Bremer's Coalition Provisional Authority (CPA), which took big steps with little consultation with Iraqis, steps Allawi and many others see as blunders:

- The Americans disbanded Iraq's army, which Allawi said could have helped quell a rising insurgency in 2003. Instead, hundreds of thousands of demobilized, angry men became a recruiting pool for the resistance.

- An order consolidating decentralized bank accounts at the Finance Ministry bogged down operations of Iraq's many state-owned enterprises.

- The CPA's focus on private enterprise allowed the "commercial gangs" of Saddam's day to monopolize business.

- Its free-trade policy allowed looted Iraqi capital equipment to be spirited away across borders.

In his 2006 memoir of the occupation, Bremer wrote that senior U.S. generals wanted to recall elements of the old Iraqi army in 2003, but were rebuffed by the Bush administration. Bremer complained generally that his authority was undermined by Washington's "micromanagement."

Although Allawi, a cousin of Ayad Allawi, Iraq's prime minister in 2004, is a member of a secularist Shiite Muslim political grouping, his well-researched book betrays little partisanship.

On U.S. reconstruction failures - in electricity, health care and other areas documented by Washington's own auditors - Allawi writes that the Americans' "insipid retelling of `success' stories" merely hid "the huge black hole that lay underneath."

For their part, U.S. officials have often largely blamed Iraq's explosive violence for the failures of reconstruction and poor governance.

The author has been instrumental since 2005 in publicizing extensive corruption within Iraq's "new order," including an $800-million (600-million EUR) Defense Ministry scandal. Under Saddam, he writes, the secret police kept would-be plunderers in check better than the U.S. occupiers have done.

As 2007 began, Allawi concludes, "America's only allies in Iraq were those who sought to manipulate the great power to their narrow advantage. It might have been otherwise."