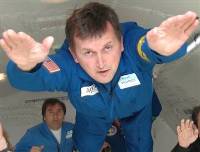 A Soyuz spacecraft carrying Simonyi and two Russian cosmonauts is to launch Saturday night from the Baikonur cosmodrome in Kazakhstan.

The cosmonauts, Fyodor Yurchikhin and Oleg Kotov, are to replace Russian Mikhail Tyurin and American Miguel Lopez-Alegria, who have been on the International Space Station since late September. Simonyi, Tyurin and Lopez-Alegria are to return to Earth on April 20.

The 58-year-old Simonyi, who made a fortune with projects including Microsoft Word, is paying US$20-25 million (EUR15-18.75 million) for the trip organized by U.S.-based Space Adventures, that has also brokered the trips of four "space tourists" before him.

"I contribute to civilian space flight by being a customer and communicating the experience to other potential clients, and we hope that the number of potential clients is going to increase greatly in the future," Simonyi told reporters at the expedition's final news conference, speaking behind a glass wall to avoid contamination.

Simonyi said he felt relaxed about the flight and quipped that he was more worried about talking to reporters. "About the flight, that's a completely different story: once I am in the seat and concentrate on the mission, I feel very, very good about it."

Simonyi said he had spoken with Gregory Olsen, and Anousheh Ansari - the two most recent space tourists - "and they gave me a lot of advice not to move my head and not to drink too much before the launch."

He will, however, get to indulge his taste buds after arrival on the ISS. He's taking a meal for him and his colleagues prepared under the auspices of U.S. domestic diva Martha Stewart.

Simonyi began programming on a bulky Soviet computer called Ural-2 as a teenager in Hungary. He then traveled to Denmark to work as a programmer and moved to the United States in 1968, where he worked at Microsoft developing Microsoft Word and Excel and eventually founded his own software company.

He said his friend Microsoft CEO Bill Gates was excited about Simonyi's adventure. "I am in contact with Bill and he is very happy that I am doing this."

Asked about their first wish upon returning to Earth, Yurchikhin said his desire would be to "hug my wife and children," Kotov said he couldn't wait to "breathe fresh air when the hatch is open," while Simonyi sounded more businesslike. "After we return, after we have rehabilitation I need to go back to work that I interrupted for this very interesting experience."

While at the space station, Simonyi will be conducting a number of experiments, including measuring radiation levels and studying biological organisms inside the lab. He will also be writing an Internet blog that he hopes will inspire others, especially children, to get interested in space exploration.

"There is an element of hope. We don't quite know what we are going to find, but we have to go and see and find it," Simonyi said.