Christian pilgrims from around the world filled the narrow cobblestone streets of Jerusalem's Old City on Good Friday, some carrying large wooden crosses as they followed the route Jesus took on the way to his crucifixion. 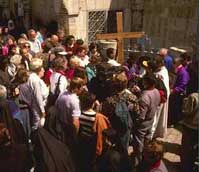 Pilgrims from the United States, India, South Korea, the Philippines, Russia and many other countries retraced Jesus' final walk through Jerusalem on the day of his death - commemorated as Good Friday. Many held candles and sang hymns in languages including English, Latin and Hindi.

Clergymen in colorful robes, representing different Catholic and Orthodox denominations, filed early Friday into the ancient Church of the Holy Sepulcher, where many believe Jesus was crucified and buried. In a yearly tradition, the church's doors were unlocked by a member of the Muslim family that has held the key for centuries.

Inside the church, pilgrims pressed their heads to the long, smooth stone where Jesus' body is believed to have been washed after being removed from the cross.

The calendars of five major Christian sects coincide this year, a convergence that happens only once every four years, and crowds were expected to be larger than usual.

Israeli police spokesman Micky Rosenfeld said hundreds of police were deployed around the Old City to maintain order as thousands of pilgrims retrace the route that Jesus took as he carried his own cross to the site of his crucifixion.

There are 14 stations along the route, known as the Via Dolorosa, or Way of Sorrows, each marking an event that befell Jesus on his final walk. The final five stations are inside the Church of the Holy Sepulcher, where many Christians believe Jesus was stripped, crucified, and finally laid to rest before being resurrected on Easter Sunday.