Following the lead of lawmakers in Confederate neighbor Virginia, the senate unanimously backed a resolution acknowledging its "profound contrition for the official acts that sanctioned and perpetuated the denial of basic human rights and dignity to fellow humans." 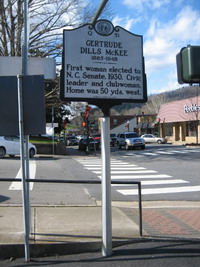 "This is a way to reflect upon this and express our understanding and our regret for official actions of our state," said Senate Majority Leader Tony Rand, a Democrat and the bill's primary sponsor.

Such an apology, Rand added, will help us "to try to be better children of God and better representatives of all the people of this state."

A similar resolution is pending in the state House, which adjourned for the Easter holiday weekend on Thursday without taking any action.

The resolution, co-sponsored by 35 of the Senate's 50 members, also "called on all citizens to take part in acts of racial reconciliation." All 46 members of the Senate who were present Thursday voted in favor of the measure.

The resolution recounts a long history of discrimination against North Carolina's black population, from the first slaves in the British colony of "Carolina" in 1669 through the Civil War and then segregation laws known as Jim Crow laws, which promoted inequality into the mid-1900s.

"What we're talking about is state-sponsored discrimination," said Democratic Sen. Tony Foriest, who is black and recalled during the Senate's debate the segregation he experienced as a child. "The state went out of its way to deny its people the right to life and liberty."

Black members of the Senate said they were pleased to see the resolution pass, but added that lawmakers need to back up their words with actions to improve the quality of life of blacks who still suffer from the effects of slavery and discrimination. They called for improvements to the state's education system and improving the access of black-owned businesses to state contracts.

"Any conflict or wrongdoing can never have a closure until there is an apology or reconciliation has occurred," Jacumin said.

Virginia lawmakers unanimously passed their resolution apologizing for slavery in February. Lawmakers in Georgia and Missouri are considering similar legislation.