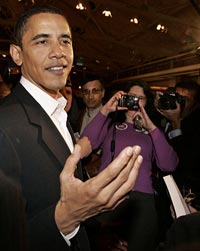 The first-term senator proved he could channel his appeal into significant financial muscle, and he dispelled, for now, questions about the durability of his anti-war, "hope"-driven candidacy.

Obama's three-month money total stopped just short of the record $26 million (EUR19.5 million) Clinton brought in. By any measure, it was an astonishing figure for a political newcomer elected to the U.S. Senate just two years ago.

Obama was in Iowa Wednesday, with a rally in Mason City planned for the afternoon. In an e-mail message to supporters, he said his fundraising success represented "an unmistakable message to the political establishment in Washington about the power and seriousness of our challenge."

The campaign said at least $23.5 million (EUR17.6 million) of the $25 million (EUR18.7 million) total was available to be used in the highly competitive primary race, in which the party gradually narrows the field to one candidate for the November 2008 election.

The Clinton campaign has yet to disclose how much of her $26 million (EUR19.5 million) can be used for the primary and how much was earmarked for the general election. Clinton also transferred $10 million (EUR7.5 million) from her Senate account, bringing her total campaign funds to $36 million (EUR27 million).

Obama's strong showing was a blow to Clinton, who sought to position herself as her party's strongest White House contender in part through her fundraising prowess. She has spent years developing a national fundraising network through two Senate campaigns and her husband's eight years as president.

Obama began his campaign with a relatively small donor base concentrated largely in Illinois, his home state. But his early opposition to the Iraq war and voter excitement over his quest to be the first black president quickly fueled a powerful fundraising machine.

He attracted Wall Street executives and big-money Hollywood moguls like billionaire David Geffen, a former Clinton supporter who shifted allegiances. But he also focused on smaller donations and raised money in several small cities, a practice Clinton aides say she will follow this quarter.

Clinton was at home in New York Wednesday and had no comment on Obama's announcement. But her campaign manager, Patti Solis Doyle, issued a statement congratulating Obama and said the fundraising of all the Democratic contenders "demonstrates the overwhelming desire for change in our country."