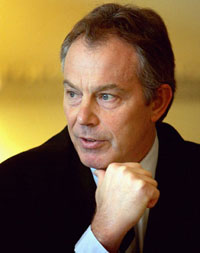 The British crew sat in business class on the British Airway's flight that departed Mehrabad International Airport around 8:30 a.m. local time, an Associated Press reporter at the scene reported.

They arrived at the airport in a convoy of black sedans about an hour earlier escorted by the elite Revolutionary Guards. British ambassador to Iran, Geoffrey Adams, who was at the airport, declined to comment.

Before boarding, the sailors received gifts given to them on Ahmadinejad's behalf, Iran's state-run news agency, IRNA, reported.

The hardline president's announcement of their release Wednesday defused a growing confrontation between the two countries. In London, British Prime Minister Tony Blair expressed "profound relief" over the peaceful end to the 13-day crisis, telling the Iranian people that "we bear you no ill will."

The crisis had raised oil prices and fears of military conflict in the volatile region. The move to release the sailors suggested that Iran's hardline leadership decided it had shown its strength but did not want to push the standoff too far.

Iran did not get the main thing it sought - a public apology for entering Iranian waters. Britain, which said its crew was in Iraqi waters when seized, insists it never offered a quid pro quo, either, instead relying on quiet diplomacy.

Syria, Iran's close ally, said it played a role in winning the release. "Syria exercised a sort of quiet diplomacy to solve this problem and encourage dialogue between the two parties," Syrian Foreign Minister Walid al-Moallem said in Damascus.

The announcement of the release came hours after U.S. House Speaker Nancy Pelosi met with President Bashar Assad in Damascus, trying to show that a U.S. dialogue with Syria - rejected by the Bush administration - could bring benefits for the Middle East. The British sailors were not part of their talks, and it was not clear if the release was timed to coincide with her visit.

Several British newspapers credited Blair's foreign policy adviser Nigel Sheinwald and Iranian chief negotiator, Ali Larijani, with laying the groundwork for an agreement during telephone contacts that began Tuesday night. Larijani had gone on British TV on Monday and signaled that Tehran was looking for a diplomatic solution.