Man and his pet cockatiel on pine tree 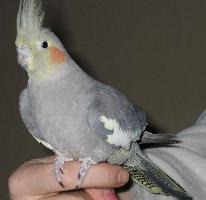 Man and his pet cockatiel on pine tree

William Hart, 35, had climbed about 60 feet (18 meters) up the tree to get the bird after it escaped from its cage and flew out a bedroom window. Television video showed him standing on a branch Tuesday evening awaiting rescue, the exotic white bird apparently tucked under his shirt.

The cockatiel, Geronimo, got out after Hart's daughter apparently forgot to latch his cage after feeding him, Hart told the Houston Chronicle. He said he spotted the bird in flight and chased him, then climbed the tree until Geronimo flew to his arm.

That is when Hart realized they were stuck. He said he yelled to his sister, who was helping him chase the bird, to call authorities.

Firefighters had trouble backing a truck up to the tree because of the rain-saturated ground, so the Coast Guard helicopter was called in. The crew used a harness to get both man and bird down.

Hart had a few scratches and a bite on his finger from the frightened bird nipping him, but he said he was glad it all worked out. The shaking bird tucked its beak under his collar as he held it.