Three arrested in connection with killing of 13 Asiatic lions 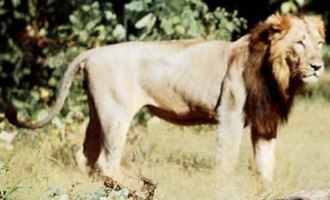 Three arrested in connection with killing of 13 Asiatic lions

Police of India have arrested three men which helped killing 13 Asiatic lions in the past two month around the only sanctuary for this rare animals in Western India.

Asiatic lions once roamed much of Asia but only about 350 remain, all of them in the Gir National Park, and the recent killings have raised fears for the future of the species.

All of the men detained this week were suspected to be local contacts for lion poachers, said Kuldeep Narain Sharma, a senior police official, adding one was a forest guard at the sanctuary, nearly 185 kilometers (115 miles) south of Ahmadabad, the main city in western Gujarat state.

Sharma refused to identify the arrested men or provide other details, because the case is under investigation.

The lions often cross the park's boundaries to hunt for food and water. Poachers track them and lay a trap. After they catch the animals, they remove their claws, bones and skulls - all highly prized in Chinese medicine.

The claws are also sometimes used for amulets in India, according to the Wildlife Protection Society of India.

Amit Jethwa, president of Gir Nature Youth Club, a non-governmental organization, said the arrests were too little, too late.

"The state government is reluctant to take action against the forest staff responsible for the death of so many lions in past two months. They are not even interested in understanding the gravity of the matter."

Asiatic lions can be differentiated from African lions by a characteristic skin fold on their bellies, and the males have thinner manes.