The wife and friends of Alexander Litvinenko, former Russian security agent, exerted pressure on investigators in Britain and Russia find the responsible for his poisoning death. 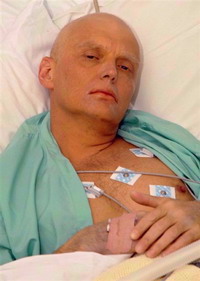 Marina Litvinenko said her husband's death following a dose of the radioactive substance, polonium-210, resulted from "state sponsored terrorism" carried out on the orders of Russian President Vladimir Putin, echoing her husband's deathbed accusation against the Kremlin.

"We will campaign to make sure that governments take all possible steps to ensure that this crime is never repeated," she said in a statement.

Litvinenko, 43, who died at a London hospital in November, was a forceful critic of the Kremlin. The Russian government denies involvement in his death.

In a letter to Prime Minister Tony Blair and Britain's law and order chief, Home Secretary John Reid, the foundation asked for "reassurance that you and your colleagues are doing everything possible to make sure that suspects will stand trial in the U.K. and will not be shielded from justice by the Russian state."

Police in London and Moscow have launched parallel investigations, but so far no one has been arrested. Berezovsky said the foundation would push for progress in inquiries into the former spy's death.

"If this case is not investigated to the end, everyone, not just in this country, will not be safe anymore," said Berezovsky, a self-exiled tycoon and Kremlin foe. "For me, it's almost clear, it's made by the Russian state and Putin was personally involved in that."

It will also help anyone who suffered psychological, physical or material harm in the case to file compensation claims, he said.

"Until the method of this absolutely new type of killing using a nuclear micro-bomb is uncovered, not a single person in the U.K. or elsewhere in the world can be feel safe against a similar murder," Berezovsky said.

Litvinenko's widow, who wore black at the launch at London's Royal United Services Institute, a military think-tank, said she had watched her husband suffer a painful death.

"I can't say what I feel about the people who did it to him ... but what I do want is justice," she said.

Russia's ITAR-Tass news agency reported Tuesday that the Russian investigators had finished their inquiries in London, but did not rule out another trip to Britain in future.

Scotland Yard has sent a file of evidence on the Litvinenko case to Britain's Crown Prosecution Service, which will decide if any charges are to be brought. But prosecutions have not laid any charges so far.

"We will be meeting with the British government and prosecutors and calling on the U.N. to ensure that there is an effective investigation," Christian said.