Presidential bids breake all records and separate haves from have-nots

It the first  quarter democrat Hillary Rodham Clinton and Republican Mitt Romney   raised record amounts of money for the presidential bids. The records are also broke by Republican candidates Rudy Giuliani and John McCain and Democrat John Edwards. It seems Barack Obama  will do the same. 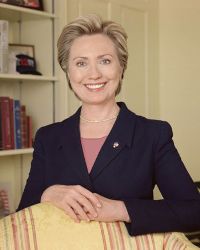 Presidential bids breake all records and separate haves from have-nots

In a campaign season of staggering sums, the tallies for the year's first fundraising quarter effectively separated the big-money contenders from the pack of more than a dozen Republicans and Democrats running for president.

"We now officially cut the fields in half," said Anthony Corrado of Colby College in Maine, who specializes in presidential elections and campaign finance. Even so, he cautioned against placing too much emphasis on the early money leaders. "There's still so much time left."

As history has shown, an early advantage doesn't always make for a party's nominee or a White House winner. Thus, the pacesetters of today will seek to continue beefing up their war chests while their lesser-known and lesser-funded rivals feverishly work to make up deficits.

The potential result: "We may see even higher fundraising tallies being reported in the months ahead," said Michael Toner, a former Federal Election Commission chairman.

That seems almost unfathomable given the take in the first quarter.

Combined, five of the six top-tier presidential candidates reported raising a jaw-dropping $90.5 million (EUR67.71 million) from Jan. 1 through March 31. The sum doesn't include Obama's tally; he likely will disclose it this week.

Ten months before the first primary votes are cast, the dollar chase has only just begun, and the initial sums indicate that several candidates could ultimately amass an unprecedented $80 million (EUR59.85 million) to $100 million (EUR74.82 million) campaign war chest heading into 2008. Strategists from both parties predict the wide-open presidential contest could end up surpassing $2 billion (EUR1.5 billion) in total spending by all candidates and their allies.

Republican Phil Gramm of Texas brought in $8.7 million (EUR6.51 million) in 1995, while Democrat Al Gore of Tennessee collected $8.9 million (EUR6.66 million) in 1999. Gramm dropped out of the race before New Hampshire's 1996 primary, while Gore went on to win the 2000 Democratic nomination but lose the general election to George W. Bush in a contested outcome.

Regardless of such dourhistory for initialfundraising leaders, Toner said: "Early money does make it easier to attract later money, and every candidate would rather be in the position of being the fundraising leader than trailing."

So far, the Democratic side has had few surprises. That, however, could change when Obama, a freshman Illinois senator, discloses his numbers.

For now, Clinton has raked in the most among candidates who have reported their results, with $26 million (EUR19.45 million). It was not immediately clear just how much was primary and general election money. Nevertheless, the Democratic front-runner, who has an immense donor network, set the bar for the rest of the field, as expected.

For his part, Edwards collected $14 million (EUR10.47 million), including $1 million (EUR750,000) for the general election. That's double what he raised in the first quarter of 2003 during his first presidential run, and in the ballpark of what the ex-North Carolina senator had hoped to raise. The total put him securely in the top tier.

Several other Democrats trail Clinton and Edwards but are hoping to break through in subsequent fundraising quarters. They include New Mexico Gov. Bill Richardson, who raised $6 million (EUR4.49 million).

The outcome was far less predictable on the Republican side.

Romney reported a $23 million (EUR17.21 million) take - a surprising amount even though he's known as a deft fundraiser. He remains in single digits in most national popularity polls and sought to solidify his standing in the top tier of the Republican field with a substantial fundraising report. He did just that. Now he faces the challenge of sustaining that brisk fundraising pace and building upon that momentum to raise his standing in polls.

Giuliani, who leads the Republican candidates in national surveys by double digits, brought in $15 million (EUR11.22 million) in the first quarter even though he dramatically lagged both Romney and McCain in setting up a national campaign organization. The former New York City mayor is a celebrity who has been a huge fundraising draw for the Republicans in years' past. His campaign said he raised $10 million (EUR7.48 million) alone in March.

Perhaps the most stunning figure came from McCain, the Arizona senator who once was considered the favorite to win the nomination. He collected only $12.5 million (EUR9.35 million). That was far below expectations, given that he spent more than a year building a national campaign organization, collecting endorsements of the Republican establishment and locking up the support of a slew of big-time donors.