Iran is not aiming to swap the 15 British sailors it detained for the five Iranians arrested in northern Iraq, the deputy foreign minister was quoted as saying on state television on Monday. 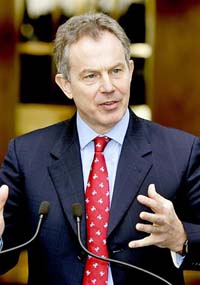 In comments read out by a newscaster, Deputy Foreign Minister Mehzi Mostafavi did not say what Iran plans to do with the British sailors, but he said they were being interrogated and he rejected British claims that they were in Iraqi waters when the Iranian navy seized them on Friday.

"Iran has enough evidence to prove that the British Forces personnel were detained in Iranian waters," he said. He added that the British government was accountable for their actions, reports AP.

British Prime Minister Tony Blair warned Iran on Sunday that he regarded the seizure of the 15 sailors as "very serious."

"It is simply is not true that they went into Iranian territorial waters," Blair told reporters while on a visit to Berlin.